New Orleans is currently in the throes of Jazz Fest.

For those of you who don’t know what that is, Jazz Fest—or, the New Orleans Jazz and Heritage Festival—is a famous annual festival celebrating music and culture in New Orleans. It’s held at the New Orleans Fairgrounds. It spans seven days over two weekends. It draws hundreds of thousands of people.

But even that description doesn’t do the event justice. There are twelve different music stages and tents set up in the Fairgrounds and a lineup of over a hundred performance groups—this year’s headliners include Stevie Wonder, Pearl Jam, Paul Simon, Red Hot Chili Peppers, Snoop Dogg, and Van Morrison. There’s also a huge number of food and crafts vendors who set up at the Fest—over 200 food offerings sold! Some of us to go to the Fest at least as much for the food as for the music: my personal favorites include the Crawfish Monica, mango freeze, crawfish beignets, seafood stuffed mushrooms, and Chef Linda Green’s award-winning yakamein.

This past weekend, my colleague Ann Lipton and I traipsed down to the Fairgrounds to find the fun. While enjoying performances by Janelle Monáe (amazing), the Red Hot Chili Peppers (meh), Leroy Jones (so good), Herlin Riley (just, wow) and others, we chatted a bunch about vendor licensing and regulation at Fest. We even ran into an on-duty New Orleans revenue agent who was more than happy to tell us all about tax compliance at the Fest and kindly gave permission to blog about it.

After some research, some casual conversations, and some lurking around the food booths, here’s what we now know about Jazz Fest and taxes:

The New Orleans Jazz and Heritage Foundation, which owns and runs Jazz Fest, is a 501(c)(3). Until 2016, a law enacted in 2011 exempted the Foundation from sales tax on sales of personal property, ticket sales, and parking fees at Jazz Fest. (Note that this is separate from the more general sales tax exemption under Louisiana law on sales at events sponsored by nonprofits where the entire sales proceeds are used for charitable and related purposes. The “Jazz Fest exemption” I’m talking about here is a more specific exemption for events that presumably don’t fall under the general exemption.)

The language of the 2011 Jazz Fest exemption is quite amusing and also transparent in its intentions:

“[T]he sales and use tax imposed by taxing authorities shall not apply to an event sponsored by a domestic nonprofit organization…when the event provides Louisiana heritage, culture, crafts, art, food, and music, and the sponsor has contracted for the production management and financing services for the event….The provisions of this Subparagraph shall apply only to an event which transpires over a minimum of seven but not more than twelve days and has a five-year annual average attendance of at least three hundred thousand over the duration of the event.”

I’m not sure what other New Orleans festival-like event could possibly meet the requirements of the 2011 exemption—it’s so clearly targeted at just Jazz Fest, which runs for exactly seven days and drew an attendance of 460,000 last year and 435,000 in 2014. In fact, a Louisiana Department of Revenue publication states about the exemption that “[t]o date, only the Louisiana Jazz and Heritage Festival meets the criteria and is exempt from collecting state sales tax on their sales of tangible personal property, admission charges, outside gate admissions and parking fees associated with the event.”

Effective April 1, 2016, in the face of a budget crunch, the Louisiana Legislature hiked certain sales taxes and rolled back certain exemptions and exclusions. As a result, Jazz Fest gate admissions will be subject to a 5% sales tax between April and June 2016, which will fall to 3% from July 2016 through June 2018 and then apparently goes back down to zero. See Revenue Information Bulletin No. 16-020. I can’t quite tell whether sales of tangible personal property at Jazz Fest (e.g. T-shirts and other memorabilia) will also now similarly be subject to sales taxes for these periods. I think they they will be, because they aren’t specifically carved out from the 2016 legislation—see La. R.S. 47:302(X), 47:321(L), 47:331(S) and Revenue Information Bulletin No. 16-012—but I haven’t seen any guidance on that question outside of my reading of the statute and this very general LDOR webpage.

Regardless, the Jazz Fest tax exemption has only ever applied to sales by the sponsor of the event (i.e., the Foundation). The other food and craft vendors who sell at the Fest must pay sales tax on sales. One really interesting tidbit is that none of the Jazz Fest food vendors take credit card, though some craft vendors do. In other words, it’s a 100% cash based economy for Fest foods, simply ripe for tax compliance issues to arise. See, e.g., Joseph Bankman, Eight Truths about Collecting Taxes from the Cash Economy, 117 Tax Notes 506 (Oct. 29, 2007). Apparently, some vendors pull in a couple of hundred thousand dollars in food sales over the seven Fest days, and there’s an obvious incentive (and opportunity) to underreport sales.

So every year, there are a number of New Orleans revenue agents who wander around the Fest and make sure food and crafts vendors are being compliant with sales tax obligations. 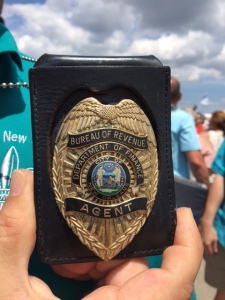 So, for example, revenue agents will stand by a food booth with a clicker-counter and count the number of food items sold in a given time frame, in order estimate sales numbers and discourage underreporting of sales. This apparently has distortionary effects—each food vendor booth usually has a number of queue lines open for customers, and sometimes food vendors will close down some of the lines if there’s a revenue agent lurking, in order to minimize the sales count until the agent leaves. (Note—the Louisiana sales tax has both a local component and a state level component. I don’t know whether the Orleans revenue agents are enforcing both, or just the Orleans portion of the tax.)

Anyway, that’s what we learned while wandering around the Fest and through some quick follow up research! I’ll likely be back at the fest this weekend and will report on any further observations. Also, look for another post coming up that celebrates “unofficial” Jazz fest and all of its interesting regulatory issues.