I assume it's not just me who checks the 7th Circuit opinion pages multiple times a day to see whether the #ParsonageAllowance decision has been issued yet. I mean, everybody's checking, right? pic.twitter.com/mwcEymH3VY

I’ve been following Gaylor v. Mnuchin, the parsonage allowance case, for years now. A couple months ago, I got to hear oral arguments the second time it went up to the Seventh Circuit. And I’ve been waiting eagerly since for the court to issue its decision.

As of 11:18 pm Central time on January 30, the court had not yet issued its opinion. But, in spite of the case being fully briefed and argued, one update to the case recently occurred: the state of Michigan changed its mind.   END_OF_DOCUMENT_TOKEN_TO_BE_REPLACED

It’s not even an election year, but the last couple weeks have been exciting for tax policy fans. First was Rep. Alexandria Ocasio-Cortez inserting the idea of a 70% top marginal rate into the public conversation. Then today, Sen. Elizabeth Warren proposed a wealth tax on taxpayers with household wealth in excess of $50 million. While she hasn’t released details, and the news reports aren’t completely clear, I’m assuming that households would pay 2% of their net worth in excess of $50 million, and an additional 1% on their wealth in excess of $1 billion.[fn1]

Can the government do that? Maybe, but probably not with a traditional wealth tax.  END_OF_DOCUMENT_TOKEN_TO_BE_REPLACED

Like much of America, I watched a Fyre Festival documentary last week. I chose Hulu’s Fyre Fraud over Netflix’s Fyre: The Greatest Party That Never Happened because I only had time for one, and Fire Fraud had an interview with Billy McFarland. (I’ve since heard great things about Netflix’s documentary, too, so I’ll probably watch it eventually.)

About nineteen and a half minutes into the documentary, we’re introduced to Ja Rule; we see him in an interview (with Wendy, apparently), who says to him, “So you spent two years in prison.”

He responds, “Yeah, I went in on my state charge for the gun charge, and they ran it concurrent with my tax stuff.”

Now, Ja Rule’s tax troubles are probably the least interesting part of the documentary (and are over, iirc, as soon as he laughs after saying “tax stuff”). But I always find celebrity tax evasion interesting, so I thought I’d run it down a little. END_OF_DOCUMENT_TOKEN_TO_BE_REPLACED

The paper argues that the choice of tax base should take into account what tax base is most helpful to the economy in recessions. It points out that recessions are not rare; between 1980 and 2010, there were 5 recessions, covering 16% of that period. The paper does two main things. First, it provides interesting stylized examples showing how, following an economic shock that reduces income or housing value, three types of tax bases (income, sales, and property) each interact with household credit constraints and adjustment costs (committed consumption of housing) to either stabilize or aggravate the negative economic shock. These examples illustrate quantitatively how different tax bases can affect taxpayer behavior in a recession, and thus the local economy.

Second, the paper contains an original empirical study of county tax bases for 2007-2014, to see the effect of tax bases on the recessions of 2001 and the Great Recession of 2008-2009. Andrew combined data from the Government Finance Database, Zillow, the FBI’s Uniform Crime Reports, and the IRS’s Statistics of Income, among other places. Although the results for the two recessions were not identical, Andrew generally found in his OLS regressions that counties that relied more on property taxes had smaller increases in unemployment during the two recessions and may have recovered from the recession more quickly. Sales taxes generally had countercyclical effects, as well, particularly in stabilizing government revenues during the Great Recession. In general, counties that were most reliant on income taxes suffered the most in the two recessions (though the results for income taxes generally were not statistically significant). END_OF_DOCUMENT_TOKEN_TO_BE_REPLACED 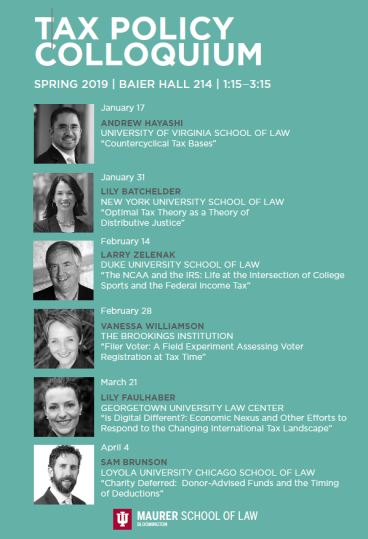 Indiana University Maurer School of Law’s 2019 Tax Policy Colloquium will kick off on Thursday, January 17. My colleague David Gamage is hosting the Colloquium this year, and I’m really excited to hear from the terrific line-up of speakers! Andrew Hayashi from Viriginia Law School will kick off the semester with his work in progress, Countercyclical Tax Bases.

As I explained last year, The Tax Policy Colloquium is a course for students that features a series of speakers. The structure involves a background session with the students in alternate weeks, to help them get up to speed on the concepts presented in the paper draft. The workshops are open to the law school community and interested guests. They are usually attended not only by the students in the course but also by me, David Gamage, senior tax attorney/Maurer alumnus Tim Riffle, and a few other faculty, typically law school colleagues and/or tax or economics faculty from other schools on campus. We also invite other attorneys practicing in Bloomington and Indianapolis, tax END_OF_DOCUMENT_TOKEN_TO_BE_REPLACED