The article is fascinating and a compelling read. The idea that people think separately about taxes and transfers seems very plausible. I had not thought before about the idea of desert applying to pre-tax income but it is quite persuasive. It adds a further layer to the argument I made in a 2004 article titled “The Entrepreneurship Effect.” That article argued that the Internal Revenue Code systematically favors business deductions over investment deductions; the difference between them is that the former require labor and the latter do not; and this reflects societal favoritism for entrepreneurship. The idea that “desert” particularly inheres in labor income adds a layer in that it helps source the societal value put on labor income and entrepreneurship. END_OF_DOCUMENT_TOKEN_TO_BE_REPLACED 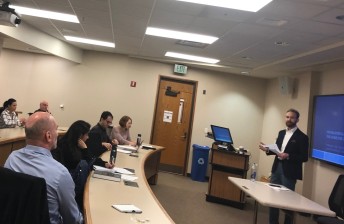 On February 6, 2020, the Indiana University Maurer School of Law welcomed our second Tax Policy Colloquium guest of the year: Prof. Werner Haslehner from the University of Luxembourg’s Department of Law, who is currently a Global Research Fellow and adjunct professor at NYU Law School. Werner presented his draft essay titled “International Tax Competition—the Good, the Bad, and the Ugly.”

States of course compete for tax base. Werner’s essay explains that “States’ general freedom to act (which we may call sovereignty) and taxpayer’s freedom to choose (which we may call liberty) – although neither is without limits – inescapably lead to competitive pressures and reactions.” (p.4) And some of this competition has been labelled as “harmful” by the OECD, the European Commission, and others. Yet, the essay points out, there is no accepted definition of the phrase “harmful tax competition.” The essay briefly reviews the literature and points out differences in approach to defining this concept. This part of the essay draws in part on Lily Faulhaber’s compelling article, The Trouble with Tax Competition: From Practice to Theory, 71 Tax L. Rev. 311 (2018), which pointed out the lack of definitional consensus and offered a typology of tax competition.

Werner’s essay further argues that, as commonly understood, there is no economic standard that supports a distinction between “harmful” and other types of tax competition. The essay thus proposes to replace the phrase “harmful tax competition” with “unfair tax competition.” (p.13) The essay specifically proposes “to refer as a basis for such a constraint to one of the most salient principles of moral philosophy: Immanuel Kant’s categorical imperative. According to this norm’s first formulation, one is to ‘act only in accordance with that maxim through which one can at the same time will that it become a universal law’.” (p.16). The essay provides two examples of behaviors that would be considered “unfair” under this standard: (1) ring-fencing (the provision of a tax benefit only to foreigners, not domestic taxpayers) and (2) secrecy (which, in response to a question I posed, Werner clarified refers to “secrecy as a service”—assisting foreign taxpayers in tax evasion). END_OF_DOCUMENT_TOKEN_TO_BE_REPLACED

Shelly explained that this draft is the second paper in a multi-part project she is conducting on place-based tax incentives. Last year, she published the first piece in the series, “A Typology of Place-Based Investment Tax Incentives,” 25 Wash. & Lee J. Civ. Rights & Soc. Just. 403 (2019). Place-based tax incentives are geography-based incentives that generally are intended to help low-income areas by fostering investment in those areas. The 2019 article distinguished among place-based tax incentives on two dimensions: direct and indirect tax subsidies and spatially-oriented versus community-oriented incentives. “Direct tax subsidies provide tax breaks directly to businesses that invest in low-income communities.” (p. 415) Indirect tax subsidies are instead provided to investors in such business (pp. 417-18). She cites as examples the New Markets Tax Credit (NMTC) of IRC § 45D and the Opportunity Zones (OZ) provisions in IRC § 1400Z-1 et seq. (The OZ provisions are the most oddly numbered Internal Revenue Code sections I’ve ever seen!). Spatially-oriented tax incentives focus on specific geographically-defined END_OF_DOCUMENT_TOKEN_TO_BE_REPLACED