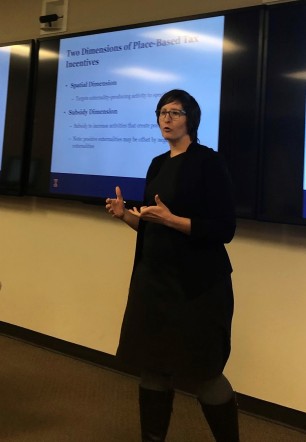 The paper Shelly presented in the Colloquium last week, “How Place-Based Tax Incentives Can Reduce Geographic Inequality,” argues in part that Congress should shift towards using tax incentives that are more community-oriented. In addition, it argues that place-based tax incentives should address the underlying causes of place-based inequalities. The inequalities the paper identifies are (1) spatial mismatch between low-income areas and where jobs for low-skill workers are located; (2) disinvestment in particular neighborhoods; and (3) weak community infrastructure due to a dearth of community institutions. The remedy for spatial mismatch would be increased access to jobs by workers in the disadvantaged area. Disinvestment calls for increased investment and extension of credit in the area. And weak community infrastructure would be improved by increased involvement of community organizations, such as nonprofits.

The paper explains that the Opportunity Zones in a state are census tracts designated by the state’s governor. IRC § 1400Z-2 allows a taxpayer who has experienced a capital gain to defer (or potentially permanently exclude) recognition of that gain if the taxpayer invests in a qualified Opportunity Fund. The Opportunity Fund, in turn, must “hold[] at least 90 percent of its assets in qualified opportunity zone property . . . .” IRC § 1400Z-2(d). 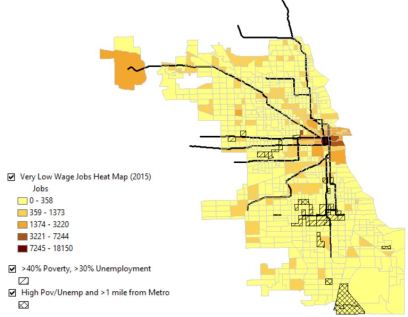 The paper uses Chicago as a case study and examines the extent to which Opportunity Zones target spatial mismatch or disinvestment. It includes a number of original “heat maps” (like the one on the right) that distinguish high-need areas from Opportunity Zones. (The black lines are Chicago’s “L” rail lines.) The paper finds, in part, that Chicago’s Opportunity Zone tracts are more closely aligned with areas of disinvestment than they are with spatial mismatch. That is because the L provides mass-transit access to job hot spots.

Of course, not all cities look like Chicago, and rural areas are very different than cities. Nonetheless, these maps are very helpful in visualizing the differences in census tracts with respect to whether they have high poverty and unemployment, contain high percentages of abandoned buildings, were subject to “redlining” in the 1940s, and whether they are targeted by current federal tax credits.

The heart of the article, as reflected in its original title, is how to design tax incentives to meet the relevant goal of increasing low-income workers’ access to jobs, increasing investment in a low-income area, or improving community infrastructure. This part of the article counsels targeting tax benefits narrowly to better accomplish the stated goals. Of course, political limitations that likely affect tax-expenditure design, but it is helpful to have recommendations for best practices in this space (as it were).

One area that was not fully clear in the original draft of the paper was whether using tax expenditures to try to rectify place-based inequities is a second-best solution. Direct grants might better address the problems Shelly identifies, but tax expenditures may be more politically palatable in some cases.

As an aside, the Opportunity Zone provisions are fairly recent, having been enacted as part of the 2017 law known as the Tax Cuts and Jobs Act. Maybe their recency is why I have yet to see an article with a title riffing on the OZ abbreviation…. I think the literature is crying out for titles like “The Wonderful Wizardry of OZ”; “There’s No Place Like Home: The Effects of OZ on Low-Income Housing”; “Opportunity Zones: Not (Just) in Kansas Anymore”; “Opportunity Zones: Pay No Attention to the Tax Incentives Behind the Curtain!”; “Ding Dong, Which Wicked Tax Incentive is Dead?” and more!

The paper, and this overall line of Shelly’s work, are very interesting and combine discussion of the tax expenditure and community development literatures. I learned a lot about Opportunity Zones and other place-based tax incentives. I look forward to reading the next paper in this series. Thank you again to Shelly for sharing her interesting and ambitious paper with us, and for a terrific talk!

Maurer’s Tax Policy Colloquium series will continue on Thursday, February 6, with Prof. Werner Haslehner from the University of Luxembourg’s Faculty of Law, Economics and Finance, presenting “Tax Competition—the Good, the Bad, and the Ugly.” The rest of the schedule is available here.