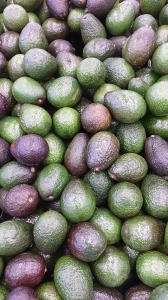 Last night, I flew back from the (wonderful!) AMT conference. After a three-hour storm delay, I landed at Chicago O’Hare and, walking to get my bag, I checked Twitter. A tweet from Voice of San Diego (VoSD) (which seems largely to be a geographically-focused ProPublica) highlighted a convergence between two of my favorite things: taxes and avocados.

I grew up in and around San Diego, and I grew up eating avocados (both in guacamole and BLAT form),[fn1] but I’ll confess that I’d never much thought about why there were so many avocados grown in San Diego; I probably always assumed that they were native to Mexico, and that San Diego had a similar climate to Mexico, so they were a natural fit.

I was wrong. Avocados were introduced to L.A. from Nicaragua in 1856; Mexican varieties started coming to California in the 1880s, and the commercial industry began in about 1910. Today, at least 85 percent of U.S. avocado production comes from California, and San Diego County produces about 40 percent of California’s avocados.

It’s unimaginable to me, but avocados weren’t always as popular and prevalent as they are today; in fact, according to the VoSD story (which you really need to read), the production of avocados exploded in the 1970s, with California production jumping from 18,000 acres to 50,000 acres.

Why? VoSD points straight at the tax law, writing that

The roots of the boom may be traced to the late-1960s and early-1970s, when Congress tried to clean up the nation’s tax code, which then allowed scores of America’s wealthiest families to avoid paying any income taxes at all. As part its tax reform effort, Congress closed a loophole that allowed people to avoid taxes by investing in citrus and almonds orchards.

Essentially, then, people who had been sheltering their income by investing in citrus and almond orchards shifted their money to avocados (among other things).

I’m not going to rehash VoSD’s story, which is excellent, but it made me curious about what, exactly, the law in question was, so I spent way more time than I really should have running this down. It turns out that the tax law was generous toward farmers, allowing them to deduct the kind of business expenses that other non-farmers would have to capitalize. By 1969, though, Congress worried that wealthy individuals who were not primarily farmers would plant citrus groves “to obtain a tax loss where there was no economic loss by planting and developing a citrus grove and then deducting the expenses involved from their high-bracket, nonfarm income.”[fn2] In addition to taking ordinary losses, when they sold the citrus groves, they would have lower-taxed capital gain.

To combat this (delicious) tax shelter, Congress enacted section 278 as part of the Tax Reform Act of 1969. It read:

CAPITAL EXPENDITURES INCURRED IN PLANTING AND DEVELOPING CITRUS GROVES.
(a) GENERAL RULE.—Except as provided in subsection (b), any amount (allowable as a deduction without regard to this section) which is attributable to the planting, cultivation, maintenance or development of any citrus grove (or part thereof), and which is incurred before the close of the fourth taxable year beginning with the taxable year in which the trees were planted, shall be charged to capital account. For purposes of the preceding sentence, the portion of a citrus grove planted in one taxable year shall be treated separately from the portion of such grove planted in another taxable year.
(b) EXCEPTIONS.—Subsection (a) shall not apply to amounts allowable as deductions (without regard to this section), and attributable to a citrus grove (or part thereof) which was:
(1) replanted after having been lost or damaged (while in the hands of the taxpayer), by reason of freeze, disease, drought, pests or casualty, or
(2) planted or replanted prior to the enactment of this section.

Essentially, then, citrus grove owners had to capitalize, rather than deduct, their first three to four years of expenses. As the current deductions disappeared, so did the appeal of citrus groves as tax shelters.

By singling out citrus, though, Congress was essentially playing whack-a-mole with motivated taxpayers. So, for example, in 1971, Congress added almonds to section 278. But high-income taxpayers were apparently happy to shift their investments into avocados. So in 1976, Congress again amended section 278 to require “farming syndicates” (basically, groups of passive investors in agriculture) to “capitalize certain cultivation, maintenance, etc., expenses of groves, orchards and vineyards to the extent such expenses are incurred before the grove, orchard or vineyard becomes productive.”[fn3]

In 1986, section 278 disappeared as Congress enacted section 263A. Section 263A generally requires the capitalization of certain costs of, inter alia, self-produced property; it provides an limited exemption for farmers producing plants with a “preproductive period of 2 years or less.”

And what does that mean? I don’t actually really know; I do know, though, that Treasury has provided a non-exclusive list of what plants don’t qualify, the costs of which must be capitalized. Included on that list? Almonds, oranges, and, yes, avocados.

So, while they no longer work to shelter income from taxes, we can thank (at least in part) tax evasion for the explosion of avocados in the U.S. diet.

[fn] It turns out that, for all we like our savory avocados in the U.S., that’s not the only way to eat them. When I lived in Brazil, avocados were always eaten (or drunk) sweet, as a fruit.