While Sam was out there visiting the National Parks, I went and acquired a noisy new hobby. 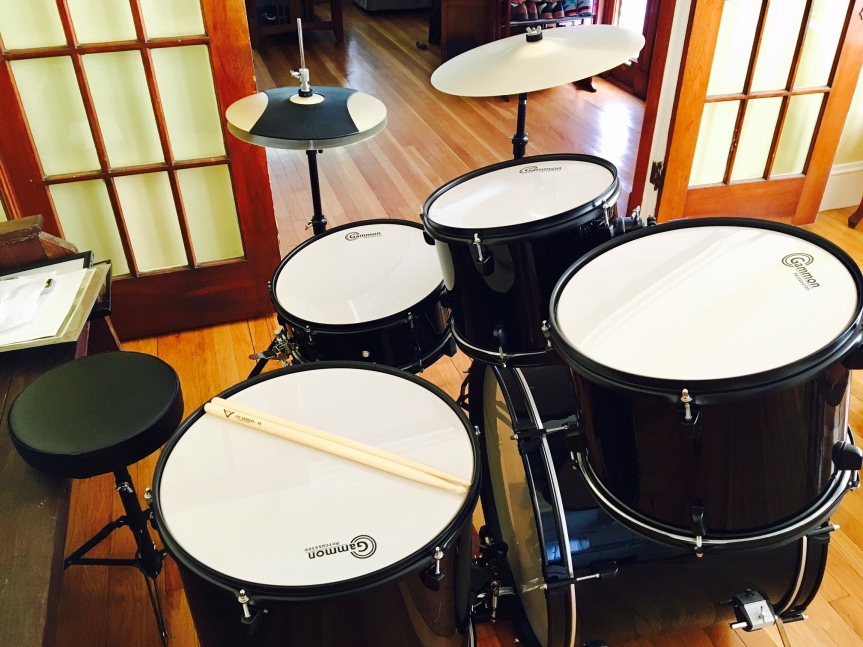 So far, I’ve only had two drum lessons but am completely hooked. What took me so long to pick up the drums? If you love music, get a kick out of repetitive motion, and enjoy making a big noise, I highly recommend it.

Learning the drum set is a matter of first impression for me. [FN1] So the actual noise making aside, it’s given me an unexpected midsummer opportunity to revisit what it feels like to learn a new skill for the first time, which of course makes me think about the fundamentals of teaching and writing in tax.

Here are some newbie observations:

I went out and bought a cheap drum set so I could practice at home. What really surprised me was the amount I learnt about the drums simply by virtue of assembling the drum set. Things I know now that I didn’t know before:

The experience of assembling my own drum set was so useful that it got me thinking about how one might get one’s tax students to do the equivalent of assembling a drum set. One thing I already sometimes do is have my students craft a legal rule different from one articulated in an existing statute and then re-draft the statute to reflect the new rule.

I wonder if this sort of exercise might give students an early opportunity to become familiar with the guts and structure of a statute and see how it all the parts fit together.

Is this a good idea or a bad idea?

The other way my new noisy hobby reminds me of tax is that nobody around me seems as enamored of it as I am. The neighbors don’t love it. And I’m pretty sure the dog hates it. It’s a good reminder that sometimes you actually are alone in your enthusiasm.

Rather than wallow in my own repulsiveness, I ended up buying a set of SoundOff Drum Mutes, which is pretty much the drumming equivalent of not discussing tax at the dining room table. ‘Cuz I’m a good neighbor like that.

Now that I’m aware of drum beats, I hear them everywhere. A song comes on the radio and all I can hear is the drum rhythm.

To be clear, at this stage, I’ve been taught exactly ONE simple drum rhythm thingy. But then while watching the Men’s Wimbledon final, I heard a variant of that rhythm come on the radio and then I had to try it on my new drum set. So now I can play rhythm 1A and 1B, which has me super tickled. That’s so much more than I could do a day ago!

But the point is, it’s the Men’s Wimbledon Final, for crying out loud! Roger Federer is about to win a record eighth Wimbledon title without dropping a set! In other words, there is something much more interesting going on at the moment than a variant of the one drum rhythm I know coming on during a TV ad. And yet, that drum variant is the thing that ends up drawing the attention.

(OK, admittedly that turned out to be a really boring Wimbledon Men’s Final. It’s actually possible that rhythm variant 1B was more interesting than that match.)

I think that this sort of thing also happens with tax scholarship–and probably with other legal scholarship–all the time.[FN2] Not to stretch the comparison too far or anything, but I think, like drums, tax scholarship has it’s own core rhythms that underpin the field. Concepts like “efficiency vs. equity” or “distributive justice” or “tax expenditure” or “optimal tax” are the backbone “rhythm section” of the tax field. Speaking only for myself, there’s a tendency to get so hyperfixated on those long-standing “rhythm-concepts” that one loses sight of the bigger legal and social picture (or at least discounts the alternative possible rhythm-concepts that might also work). The rhythm-concepts in tax policy analysis provide the enterprise with tractability and structural integrity, but it’s possible to get so attuned to them that it distracts us from the higher issues at stake. I sometimes wonder whether we’re all doing the scholarly equivalent of fixating on the rhythm variant 1B that comes on during a TV ad in the middle of a historic Men’s Wimbledon Final.

Of course, the problem is that thinking outside the core rhythms that underpin one’s field (1) takes time and may result in medium-term productivity losses, and (2) can be professionally costly if you don’t get it exactly right. So there’s that.

In any case, my drum instructor assures me that I’ll be fixated on drum rhythms for awhile. I’ll look forward to my continued inability to hear the musical forest for the drum tree.

[FN1] Well, there was that short-lived encounter with the Lion Dance Troupe drum and cymbals in college…

[FN2] And it also happens with tax law more generally. I’m thinking about how, midway through the Basic Tax class, you have students where all of a sudden they watch a game show on TV and the only thing they can think about is the tax treatment of the winning contestant.