My family’s summer vacation has already given me two posts (here and here), and it still promises a couple more, including this one.

As we drove across Alabama, we stopped by the Birmingham Civil Rights Institute. The BCRI is, in large part, a museum of the civil rights movement; it is not only interesting and informative, but it is deeply powerful and affecting to see how white Americans (mis)treated African Americans, what motivated civil rights activists, and what they faced in their activism.

I didn’t go in looking for taxes, but the Institute handed them to me anyway: 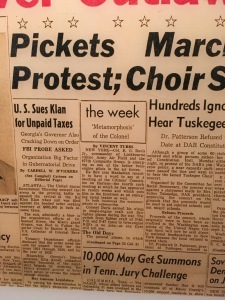 Unfortunately, to make sure the text was legible, I didn’t take a picture of the whole display; I can’t for the life of me remember the name of the paper or its date. But some quick Google searches provided more information.

Basically, the Treasury sued the KKK for $685,000 of unpaid taxes in April 1944 (about $9.6 million in current dollars). Stetson Kennedy, who infiltrated the KKK after being rejected from the Army for a bad back, stole financial information from the wastebasket of Sam Roper, the KKK’s Imperial Wizard. That information allowed the IRS to challenge the national KKK’s status as a charitable organization and press for collection of the tax lien.

To settle the case, the Klan disbanded. Sadly, it subsequently returned, but at one point in 1944, the federal income tax struck a death blow to the KKK.

A side note: the article also says to see the Campbell cartoon on the editorial page. Even if I’d taken a better photo, I couldn’t know any more details about the cartoon—this was a picture of the front page of a paper up on the wall, not the paper itself. Still, I suspect it’s referring to E. Simms Campbell, “the foremost black cartoonist of the New Deal to the postwar era.”

Campbell trained at the School of the Art Institute of Chicago, and worked both in ad agencies and as a cartoonist. For our purposes, I wanted to note that he rose to prominence partly as the result of winning a Hearst competition for the best depiction of “The Tax-grabbing Propensities of Today.” The winning cartoon? 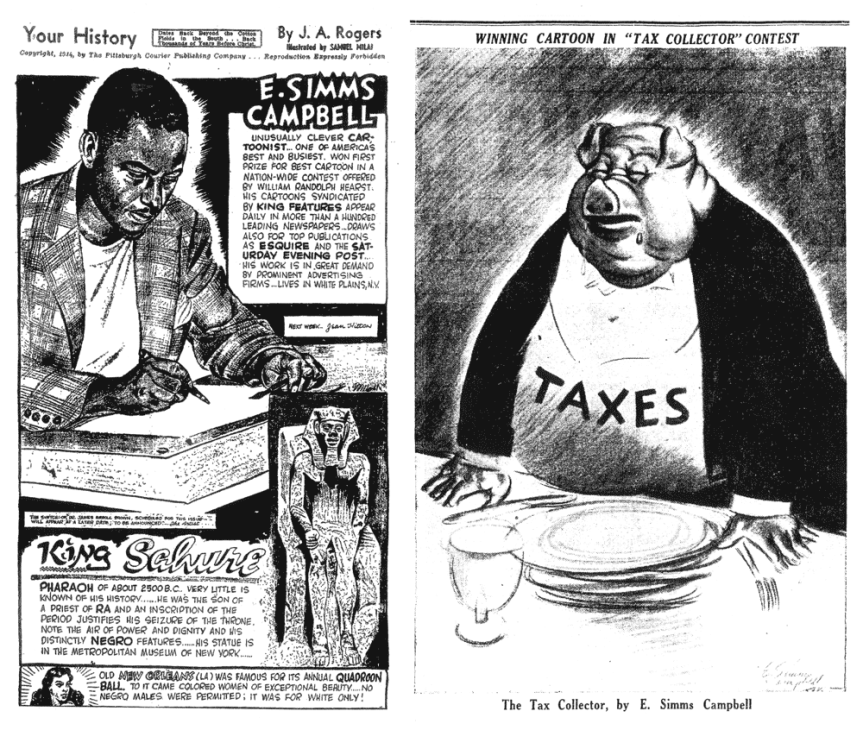 Note: This post felt especially apropos, given the events in Charlottesville.