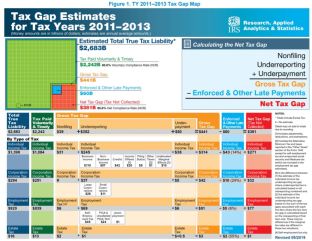 Yesterday, the IRS released new federal tax gap estimates, including a new Tax Gap Map. My first substantive post on this blog, back in May 2016 (linked here), was on the IRS’s tax gap study for the 2008-2010 tax years. The new report covers averages from tax years 2011-2013, i.e., picking up where the 2016 report left off.

The new estimates show an average estimated gross tax gap of $441 billion (compared to $458 billion on average for 2008-2010) and an estimated overall “voluntary compliance rate” of 83.6% of tax liability. The new Tax Gap Map shows that, according to the IRS’s estimates, the single largest contributor to the federal tax gap, in dollars, remains underreporting by individuals of business income, at an average of $110 billion per year.

One thing that’s obvious in reviewing the new report is that the format of the new Tax Gap Map is different. (Compare the 2019 version with the 2016 version.) One difference from the previous Tax Gap Map is that the new release does not color code or label “Actual Amounts,” “Updated Estimates,” and “No Estimates Available.” The new version instead adds a visual illustration of the relative sizes of estimated total tax liabilities, tax collections and tax gap amounts. The color coding in the “map” reflects those categories. Another difference is that the new version does not include excise taxes in the map. The previous Tax Gap Map included them, although the dollar amount of the underpayment gap for excise taxes was small and the IRS did not have estimates for nonfiling or underreporting of those taxes.

As Richard Rubin has pointed out in his WSJ story on the new report, “today’s IRS employs fewer people and audits fewer taxpayers than it used to.” Peak IRS funding was in 2010, as the chart on p.1331 here reflects. It is encouraging to see that IRS estimates show voluntary compliance rates remaining steady. In part, that reflects the scope of information reporting and withholding, as Joseph Dugan and I argue in our Working Paper, “Information Matters in Tax Enforcement.” The audit rate also matters. It will be interesting to see how tax gap estimates continue to change over time.