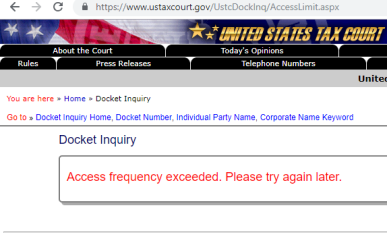 Transparency is a widely accepted judicial norm. It increases courts’ accountability and thereby increases the confidence and trust litigants and the general public have in courts’ decisionmaking. The comparatively limited access afforded to Tax Court documents is a longstanding issue. The reason Tax Court transparency differs from that of other courts is partly structural, in that the Tax Court isn’t as neatly situated in the federal government’s org chart as Article III courts, administrative agencies, or even Article I courts such as the Court of Federal Claims. (In fact, even which branch of government the Tax Court is located in has presented a puzzle.) Accordingly, the Tax Court traditionally has created many of its own rules and procedures, such as ones governing access to its documents. This means that the question is also partly cultural. As discussed below, access to Tax Court documents has increased over time, and the appointment of several new Tax Court judges may mean that we see further changes in the future.

In the past, the Tax Court’s more limited transparency has sometimes violated judicial norms and has sometimes created access inequities. For example, although the Tax Court is required by statute to make its reports and evidence “public records open to the inspection of the public,” for years the Tax Court kept its Summary Opinions confidential, which I protested in 1998 in a short Tax Notes article called “Tax Court S Cases: Does the ‘S’ Stand For Secret?”.  Although Summary Opinions lack precedential value, they are Tax Court opinions, revealing how the judge deciding the case (typically a Special Trial Judge) thinks about the issues. The Tax Court’s practice of sharing those opinions only with the parties to the case meant that the IRS had a copy of every Summary Opinion but taxpayers typically could not access the opinions in other Small Tax Cases (S cases). This created an uneven playing field. Secrecy can also lead to suspicion of favoritism or other inequities, concerns that existed in an analogous situation, in the era when the IRS did not make Private Letter Rulings (PLRs) public but large firms collected them. Litigation challenging this lack of transparency resulted in legislation, requiring PLRs to be disclosed (with taxpayer information redacted). END_OF_DOCUMENT_TOKEN_TO_BE_REPLACED