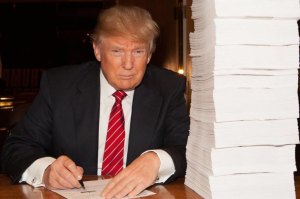 The New York Times reported tonight that in 1995, Republican presidential candidate Donald Trump may have claimed a $916 loss, a loss substantial enough that it could have allowed him to avoid paying taxes for nearly two decades.

The push notification for the story showed up on my phone at 8:30 pm Central time on a Saturday, so I haven’t had time to really dig into it. I’m sure that, over the next few days, we’ll have something more substantive to say. But in the meantime, a couple thoughts:  END_OF_DOCUMENT_TOKEN_TO_BE_REPLACED