I, and others, certainly will have plenty of articles about what is wrong and right about the current tax cuts proposals.  But, as I read the plan, I became frustrated with a proposal that was missing – fixing the Highway Trust Fund.

The most recent discussion of how to pay for the $1 Trillion spend happened during discussions with the House Ways and Means members.  According to the Washington Post, “At the meeting Tuesday, Higgins said Trump indicated the administration instead would seek to pay for infrastructure upgrades through direct federal spending — either by paying for projects with new tax revenue or by taking on debt.” 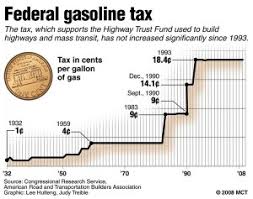 I was hoping, I know naivety, that another option would be discussed – pay for the infrastructure spending like always via the Highway Trust Fund which generates revenues via the gasoline and diesel tax.  Since there would be a budgetary shortfall, maybe we should actually increase or fix the tax.